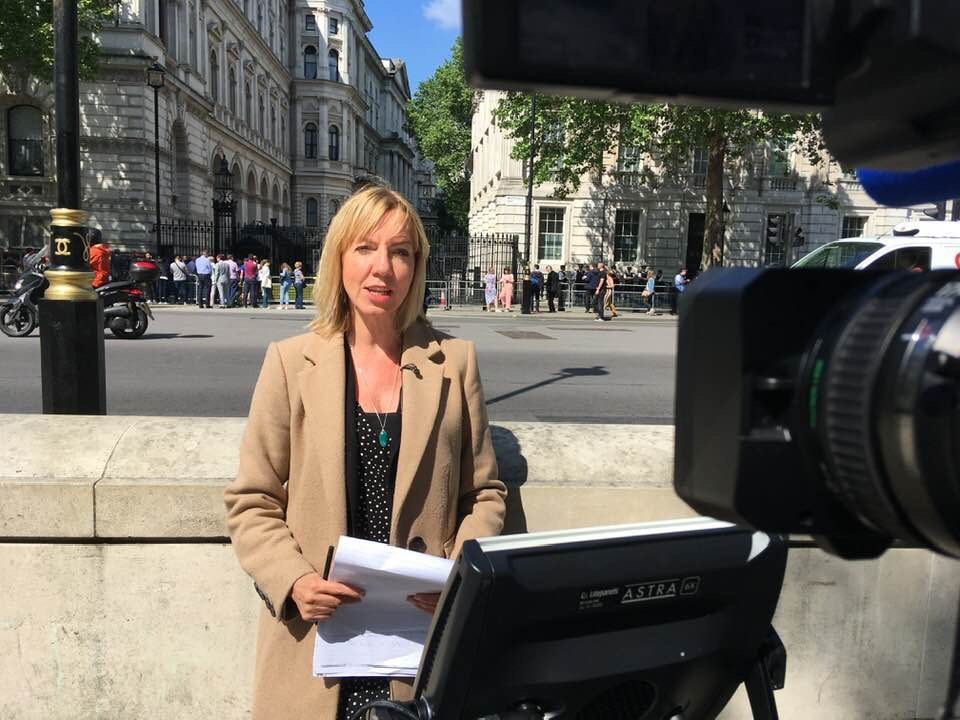 I had been doing a week at Euronews in Lyon as a news correspondent, when we heard a rumour that Theresa May was going to announce her resignation. A plane was quickly arranged to fly me back to London; forcing me to leave behind a half-bottle of Macon and a nice bit of brie. Then, it was up at 03.30 to prepare for a day of live reports – first from Westminster and then Downing Street.

Inside the gates to Number 10, Larry the Downing Street cat was scooped off the steps, and a lecturn was brought out. A clue!  Then Philip May came out, a sombre expression on his face, and took up a position where he could watch his wife. A definite clue!  There were so many journalists jostling for space it was hard to get a signal, let alone a good position.

Euronews took a live feed of the PM’s emotional speech, and I had to talk off the back of it, aiming to sum up her legacy in 2 minutes.

As the day went on, we discussed what went wrong for Mrs May (I’ll give you a clue – it’s a word beginning with “B”) and what challenges her successor would have.

My husband, who is also a TV journalist, was one of many familiar faces there. He didn’t offer me his position opposite the lecturn – that would have been a step too far – but he did give up the deckchair he’d brought, as he knew I was in for a long day. The deckchair didn’t last long – one of the cameramen sat down for a breather – and went right through it.  It was an extraordinary day. As Mrs May was drying her tears inside No 10, thousands of youngsters were marching past the gates demanding government action on climate change. Westminster was right at the centre of things that day.

Less than 24 hours I was back again; this time to cover the results of the European elections. First, my cameraman and I stationed ourselves outside the Brexit Party Headquarters, but all was quiet, so we moved to the LibDem HQ. That was quiet too, so it was off to College Green, opposite the Houses of Parliament.

I was just eating my packed dinner in the rain when I got a panicky call through my earpiece. “You’re on NOW!” I dropped everything except the brolly and some rain-soaked notes when they crossed to me, battling with the elements.  It made the presenter laugh to see me trying not to be blown away, and I had to laugh too. He referred to me as Mary Poppins throughout the report. My new strapline, perhaps?

As the night went on, the results started to come in fast, and I did my best to announce them, react, and analyse. For every live I had to add an extra layer of clothing, as the night grew colder. Luckily I had brought a big rucksack – and a new deckchair.  Finishing in the early hours, I went home for some sleep, before more lives the next day. Instead, I lay there, wide awake for hours, before going back to Westminster Monday. This time I pre-recorded a couple of interviews, with the SNP and the Green Party, before doing a live in which I threw to clips from both interviews.

Next, I’ll be covering the reaction to President Trump’s visit. Looks like being another lively week.