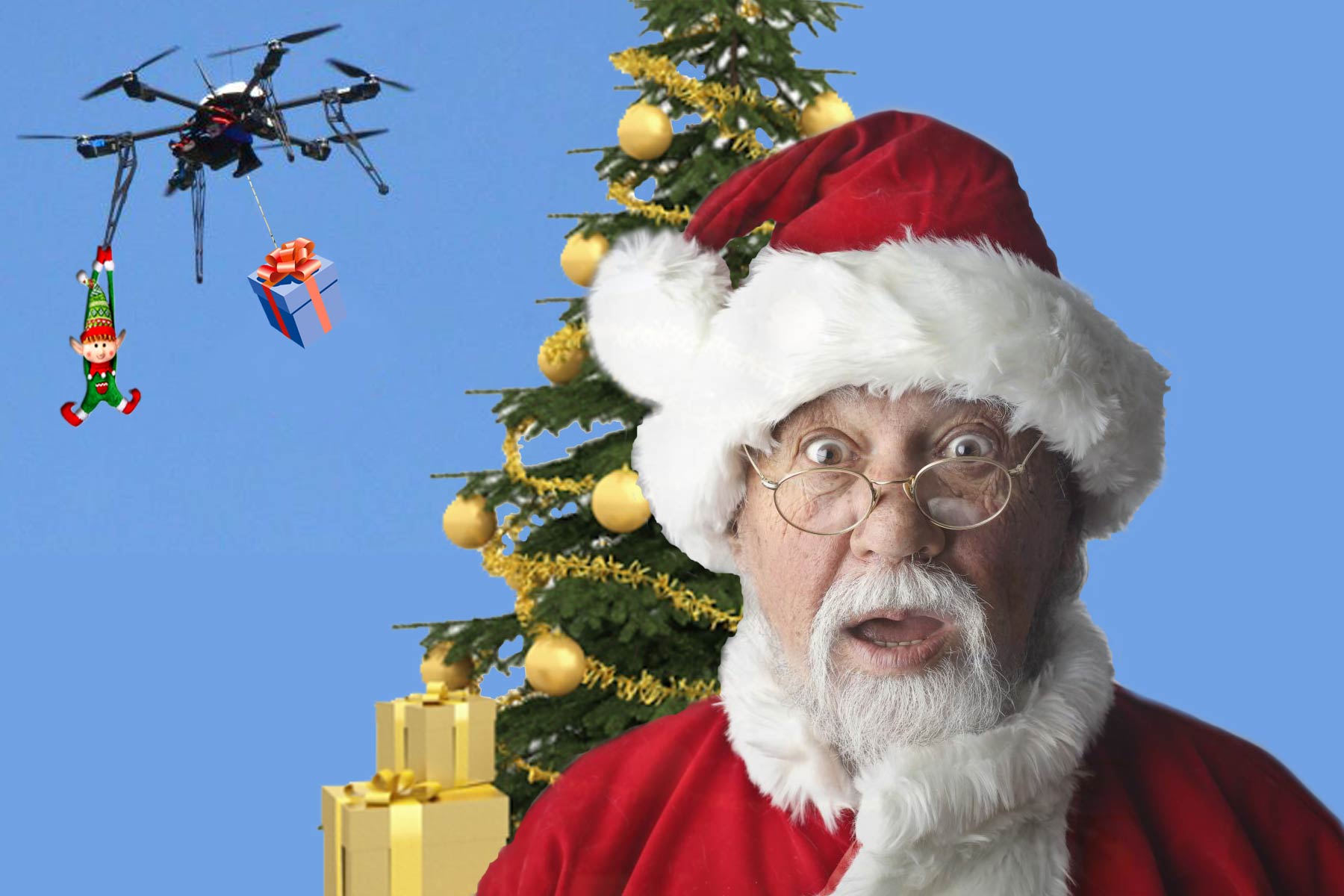 “Oh dear” said Santa as he tried once more to make his new drone achieve lift off.  He hadn’t been very successful all morning at getting it to do what he wanted.  But then suddenly he had some success with the controls as the drone took off and circled the inside of the toy factory.

Quite efficient, Santa thought. This was a first for him. Maybe he was getting the hang of these stupid drone controls at last?

But no. Things still weren’t going entirely according to plan. The drone almost landed as he wanted it to. But it then took off again having hooked up a small elf on its way and carrying him dangling across the factory making a lot of squealing noises.

He squealed even more as his little green hat fell off and disrupted a wooden toy production line below him. The noise from the elves working on the toys made Santa’s head ache as they protested both about the hat and its effects on toy production and also the fact that one of their co-workers was unwillingly airborne – held on only by his jacket hooked on one of the drone’s legs.

“It’s called a controller and you’re not on top of using it yet are you?” said Chief Elf as he smoothly took the controller from Santa’s wobbly hands and equally smoothly landed the drone and the elf in the middle of the factory floor without any damage to either.

He then placed the controller out of Santa’s reach.

“How is it that you always know how to use these modern inventions better than I do?” asked Santa.

“Years of practice at looking after you”, said Chief Elf proudly. “ I mean we won’t mention the Selfie stick and the disastrous photos, your initial unsuccessful encounters with Skype, or the terrible TV interviews with the awful eyeline, the button popping on your jacket, and the lack of any clear messages will we.“

“Er.  No“ said Santa “We won’t. But,” he added hastily moving away from his own past failures “Are you really sure that drone deliveries are the answer for us?”

“Well I have to admit that the ‘Reindeer Replacement Drone Delivery Strategy 2019 – Use of Unmanned Aerial Vehicles’  is not actually going as well as I had hoped” admitted Chief Elf. “In fact I think you need to go on another of those media training courses I’ve told you about. “

“Oh dear” said Santa “ I’ve already done some media training.  Once I got the hang of it they said I was a natural. Why do I need more?”

“Because this time TV News London will be helping you with crisis media interview training” said Chief Elf gravely.

“It seems that most of our drones are not up to the job that we want them to do. In our trial runs we’ve found that they can’t carry enough presents and they often get the postcode wrong. Which is of course disastrous”

“So I’m going to have to explain that our new drone delivery policy is a very expensive disaster not a brave step into the 21st century as we previously announced? “ said Santa.

“Yes” said Chief Elf. “And the way you’ve been flying that drone in here this morning it’s a real Elfin Safety hazard too.”

Courses can be for one person or for groups and the training can be done at your premises or at TV and radio studios.