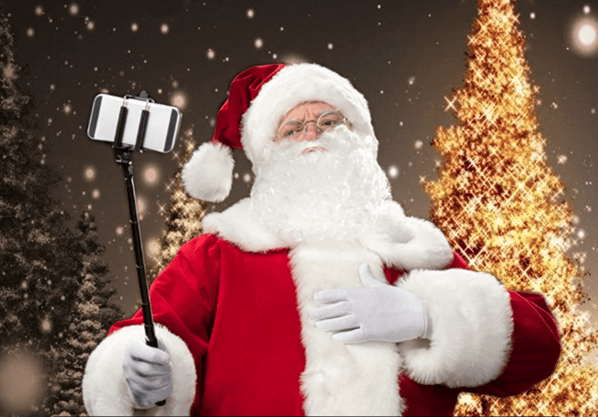 “How hard can it be?” boomed Santa as he watched his elves working on their brightly coloured handmade toys with their little hats bobbing as they hammered away and then quickly placed the toys in boxes ready for delivery to good children everywhere.

“How hard can what be?“ asked Chief Elf silkily gliding up behind him and startling Santa for the umpteenth time that morning with his sudden materialisations and altogether efficient appearance in the midst of the usual pre-Christmas rush and bustle.

“Selfies” said Santa and he lifted up his newly acquired selfie stick and proudly took some more selfies. He had already taken a lot of selfies that morning, but somehow they hadn’t turned out the way he had expected.

“Why do I look so worried? “ he murmured. “And a bit cross too. And your eyeline is all wrong” said Chief Elf (rather smugly Santa thought).

“Eyeline? Is that the same as eyeliner? Well I don’t wear that – ever” said Santa emphatically.  “No, no no.  Your eyeline is where you look when you take your selfie. It has to be correct or you’ll look a bit odd” explained Chief Elf in his ‘helpful’ voice which Santa always found to be really, really patronising.

“Plus” he continued “You need to learn to twinkle for the camera and talk to children about your vital work and how busy you’re going to be at Christmas delivering toys to them”.

“You mean – videos?” asked Santa doubtfully “Actually talking to children without seeing them? I know I can I do that on my phone as well as selfies, but I haven’t done very well with those either. After a few ho ho ho’s  I keep running out of things to say and I don’t think the messages I’ve recorded are any good.”

“Oh. So nothing much wrong then? “ said Santa sarcastically.   “Well. As you’ve now found out “ continued Chief Elf in his ‘helpful’ voice “ talking to your phone and looking convincing and jolly is a lot harder than it looks. That’s why you should go on that training course I told you about. It’s run by TV News London and it’s called Twinkle for the Camera and it will help you get things right.”

“OK “ said Santa “I really do need to learn how to twinkle for the camera. So let’s book that before Christmas!”,

“Done” said Chief Elf. “How did you do that so fast?” asked Santa.

“Magic” said Chief Elf.  “Now we need to talk properly about your social media presence. Obviously you need to be everywhere.”