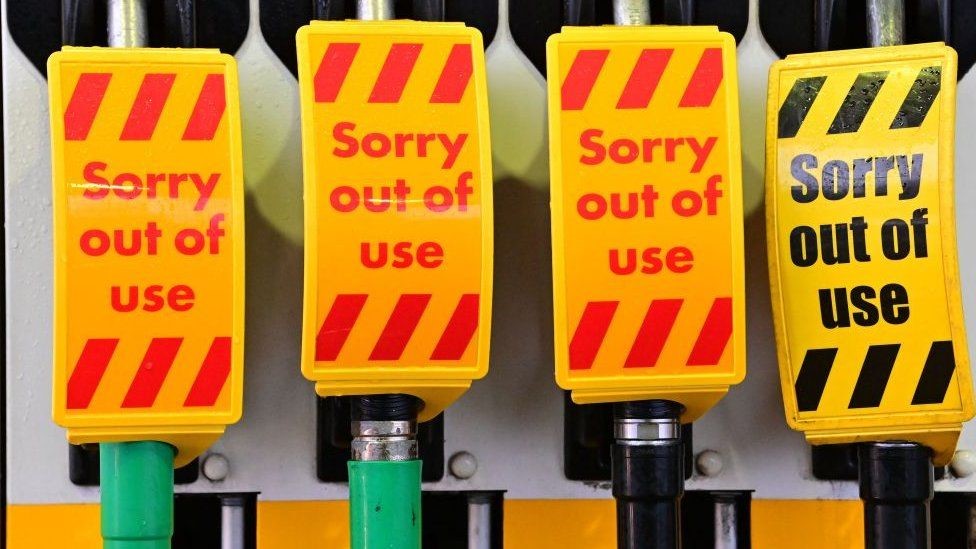 Yes this is even more serious than toilet rolls. If ever there was an example that proves the rule that you should NEVER use the word panic in a media interview, the UK’s petrol ‘panic buying’ crisis must surely be the new textbook illustration.

As virtually everybody who can find an open petrol station has queued up to fill up their tank, this has happened in spite of the fact that industry experts and Government ministers are continuing to point out that there is no shortage of petrol. The problem, they say, is a shortage of drivers to deliver it to the pumps.

Could the Government have managed its communications better? Well, not for the first time, they have made a number of mistakes in news management.

On Thursday 23 September BP, which has the largest number of petrol stations in the UK, just above Esso and Shell, announced that it was having to temporarily close some petrol filling stations in Britain because of a shortage of lorry drivers.

However this message came just hours after the Minister for Small Business, Paul Scully, had cautioned the public not to panic buy at supermarkets amid fears of some food shortages – due – again – to the shortage of lorry drivers and also to a shortage of CO2 for food production and packaging. It also came after unsettling news about rises in domestic gas prices just in time for winter.

On top of that, after 18 months of experiences with lockdowns and disruptions to normal life, the public is much more easily put into alert mode than before the Covid pandemic.  So, the public mood was getting jittery just as ministers and supermarket spokespeople were filling the airwaves and the print media with numerous interviews advising the public not to panic buy.

For example, on Friday 24 September Gordon Balmer, Executive Director of the Petrol Retailers Association, told Channel 4 news: “People shouldn’t be panic buying. There’s plenty of fuel available. But, if they do start panic buying, that will be a self-fulfilling prophecy adding to pressure on supplies.”

Government minister George Eustice, the Secretary of State for Environment, Food and Rural Affairs, kept on talking about panic buying and also broke another rule of effective communications. He blamed the public – never a good idea if you’re a politician who will need voters to back you in elections.

This last blunder was however smartly picked up and slapped down by the Number Ten Press Office who swiftly issued a statement saying that it was understandable that people wanted to stock up on petrol supplies etc.  A message reinforced by Prime Minister, Boris Johnson, himself in later interviews.

However another negative news management issue arose because the PM left all the early interviews on the petrol ‘crisis’ to his ministers.  It turned out that on one key day he was at his mother’s funeral and this very sad personal issue had understandably taken up his time away from politics.

However, as many commentators pointed out, surely he could have delegated making high-level statements to his new Deputy PM, Dominic Raab? Lack of leadership in a crisis was therefore a criticism which continued to be levelled at the PM.

And so it came to pass. Panic buying of petrol was indeed a self-fulfilling prophecy in the UK for more than a week, with very long queues for petrol and lots of shots in the media of empty petrol stations taped off.  But why did this happen?

Well, apart from the range of practical problems adding to the jittery public mood, the use of the word ‘panic’ by Government ministers was really unhelpful.

It’s a fundamental rule of communications that if you keep repeating a really dramatic, very negative word like ’panic’ especially in tandem with ‘buying’ then most of us will only hear the big negative word ‘panic’. We will think we need to take some control of what clearly must be a worrying situation. I mean if it’s not worrying, why are they using the word ‘panic’?

Telling people not to panic buy has the opposite effect to what the speakers intend and makes us think we need to be careful and get out there and do some buying.

So, in fact its arguable that frequently saying the word ‘panic’ definitely hasn’t helped the UK Government cope with a storm of difficult events.

As I always tell people when training them to give effective media interviews, you must never under-estimate the huge power of negative words.  If at all possible, always avoid using negative words, and never repeat them if they are put to you in a question.

For example if a reporter says to you “This situation is turning into a crisis for you isn’t it?” the natural response would be to say;” No it’s not a crisis.”  But the big problem in giving this perfectly normal response is that the public has then heard the word ‘crisis’ twice. You’ve repeated the negative. Their ears have pricked up and they are on alert. This is even more true with the word ‘panic’.  We all remember and react to negative words much more than to positive ones so it’s best to avoid using them at all.

So what can you do instead of repeating negatives?

You should train yourself to spot negatives in questions and always avoid repeating them.  One of the ways you can do this is by replying: “No not at all. That’s not what’s happening. What is actually happening is……..(and continue with positive statements). If you don’t do this, you run the risk of turning your problem into a crisis.

If business and political spokespeople had talked about ‘not stocking up’ or ‘not buying more than you usually do’, there could have been less public anxiety and the petrol problem might not have become such a huge petrol crisis.

The UK’s petrol panic buying crisis has starkly illustrated the huge power of careless negative messaging. Yes there was a problem of supplies to petrol stations, but telling the public not to panic made things worse and really poured fuel on the fire – to coin a phrase.

Always remember Corporal Jones in Dad’s army and his catchphrase ‘Don’t Panic‘ which he was fond of yelling at a level that increased his own panic, if not that of others as well. If you call it a panic, you create a panic. Don’t cry ‘Fire’ in a crowded theatre. Don’t tell people not to panic buy.

Online Media Interviews – Why are so many people so bad at this?