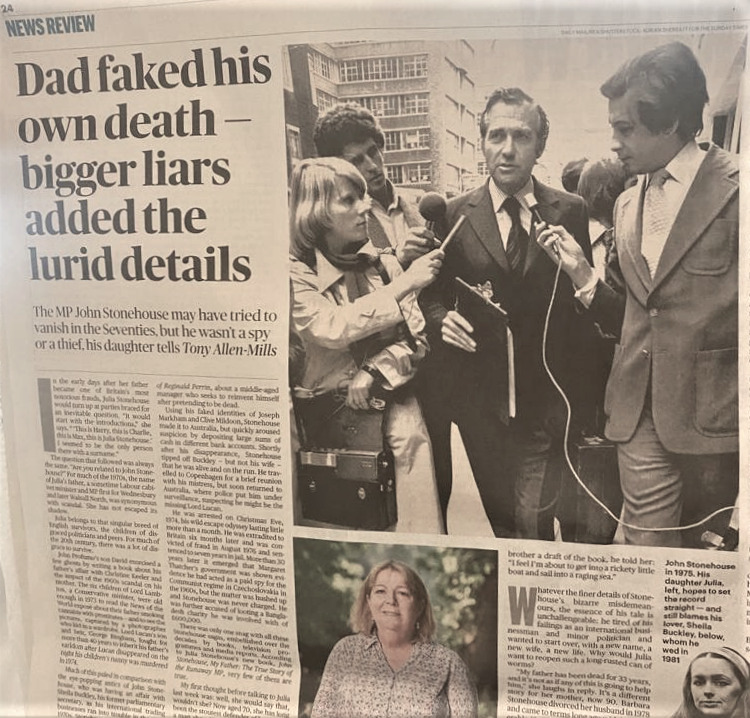 When you’ve had a long career as a journalist and broadcaster you never know what’s going to turn up from your past work.  Recently I featured in The Sunday Times for the first time ever. I have been a reporter for The Observer, but never The Sunday Times so this was really exciting – although unplanned.

In fact I was only alerted to my presence in the paper when a couple of people contacted me on the relevant Sunday asking if I’d seen the young BBC radio reporter in a picture illustrating a piece about the notorious Labour MP John Stonehouse. The picture shows him being interviewed by reporters, including me, while walking along a road in Westminster in 1975.

As you can see in the picture above, the photo is illustrating a Sunday Times article about a new book written by one of Stonehouse’s daughter’s Julia Stonehouse.  Her book,  ‘John Stonehouse, My Father: The True Story of the Runaway MP’ defends him and claims that he was more sinned against than sinning.  She believes he was “killed by human cruelty” and even expresses a wish that he had got away with his disappearance, of which more in a moment.

Others disagree and claim he was a serial philanderer and betrayer of friends and colleagues. That’s the more critical view of a recently published book on Stonehouse by yet another family member, Julian Hayes, the son of John Stonehouse’s nephew.

Once I started looking into these 2 new books on John Stonehouse, I discovered that I’m on the cover – in the same picture – of ‘Stonehouse: Cabinet Minister, Fraudster, Spy’ by Julian Hayes. Yes I truly am now a footnote in history.

In the full picture used in the Sunday Times you can see the very heavy BBC standard-issue Uher reel to reel tape recorder which I’m carrying with a strap on my shoulder. Honestly, compared to the easy digital recording of the 21st century this heavy reel to reel recording equipment seems like the Stone Age.

But that’s not true of my hairstyle, which has remained virtually the same for decades. (This is apart from a full perm in the 1980’s which was so unfamiliar it led one of my daughters to walk straight past me when I went to collect her from primary school!).

As one of my friends kindly commented on LinkedIn when I posted about the Sunday Times picture – ‘Classic style never goes out of date.’  My LinkedIn post has several comments and nearly 1,800 views so far. This is a high total for me and it either shows that I’m really interesting or that the story of John Stonehouse is still a cracker. I think probably the latter.

So would most people agree with Julian Hayes or with Julia Stonehouse? John Stonehouse had serious financial and personal problems and he had sensationally faked his death on 20 November 1974, leaving a pile of clothes on a beach in Miami. He was presumed dead, but his body was never found. Obituaries were published about him as a Labour MP, former Postmaster General and Minister for Posts and Communications.

He was arrested in Melbourne, Australia on 24 December 1974 and 6 months after he was arrested, he was deported to the UK. He was arrested on 21 charges of fraud, theft, forgery, conspiracy to defraud, causing a false police investigation and wasting police time. A big personality, he conducted his own defence. His trial lasted 68 days.

On 6 August 1976, he was convicted and sentenced to seven years in prison for fraud. He later divorced his wife and married his mistress and secretary, Sheila Buckley, who stood by him until his death from a heart attack in 1988. As a disgraced politician, he is one of only 3 people to have resigned from the Privy Council. He is also alleged to have been a spy for the Czech secret services.

This was all a terrific story in the mid 1970’s. I vividly remember a senior reporter on The Observer having to abandon his family Christmas and get on a plane to Australia to cover the story when Stonehouse was arrested on Christmas Eve 1974. In 1975 I left The Observer and became a BBC Radio reporter, working for BBC Radio Four World at One and PM.  Hence the photo which the Sunday Times and the publishers of ‘Stonehouse’ have unearthed from the archives.

For more on the two recent books on John Stonehouse, here’s an interesting review from The Observer.