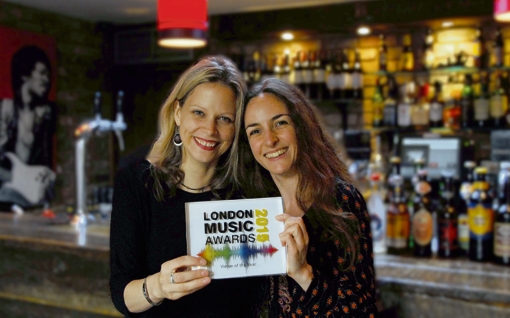 This is the story of how two passionate music lovers took on the lockdown and created a new worldwide audience for their iconic folk, roots and world music venue and TV News London is proud to have worked with them to increase their publicity in print and on radio and TV as they relaunched this summer.

When the lockdown started in March 2020, the owners of the award-winning Green Note music venue in Camden Town, North London, set out on a survival adventure and in the process created a new worldwide audience.

Like the rest of the entertainment industry, Immy Doman and Risa Tabatznik, who are unusually two women running a live music venue, had to close their doors and face a future with no income.  So, they devised a new plan to keep their business going and keep in touch with their loyal supporters. In the process, they found they had created a new audience for their music shows across the world using live streaming.

“Over the course of this year we’re proud to have curated and broadcast over 100 virtual shows, paid out over £65,000 to over 300 musicians, and been able to provide work to many of our freelance staff,” says Immy.

“The Virtually Green Note programme has kept us in touch with old friends and also created a new audience across the world with up to 4,500 views on YouTube per concert. We’ve developed a global audience for our live streams, with people regularly tuning in from across the UK as well as other countries, including the US, Canada, Australia, New Zealand, Argentina, Brazil, Japan, South Africa as well as many European countries.

Now Green Note has finally reopened from 19 July, Immy and Risa are running live shows with Covid safety measures for live audiences and also live streaming some of them. Many of the live shows are already sold out.

Green Note was founded in 2005 and some of the famous performers at the tiny, but legendary music venue include:

As well as creating a new paying audience for live streaming events during lockdown, with no limits on audience numbers, Immy and Risa have had donations from loyal supporters, and they have also had to learn how to apply for government grants.

They acknowledge that assistance from the Music Venue Trust enabling them to receive Government grants from the Culture Recovery Fund, the Arts Council and the Coronavirus Job Retention Scheme, has been vitally important to their survival. “We couldn’t have kept going without the Music Venue Trust advising us on Government help. We’ve become experts on filling in grant applications” Risa says.

“Thanks to Arts Council funding, we’ve been able to survive through the long period of closure, and it’s down to a grant from them that we’re excited to be running our ‘Cool Women’ programme. This is a season celebrating female artists and frontwomen, which will run until October this year and include artists such as Vimala Rowe, Katy Rose Bennett, Katey Brooks, Baskery and the Heard Collective amongst others.”

“In an industry which is still male-dominated, we’re proud to be supporting and promoting women in music – an area that is close to our hearts. We are feeling very positive about the future mixing live events and live streaming.”