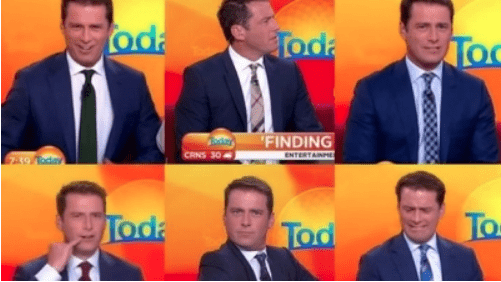 When Australian TV newsreader Karl Stefanovic decided to make a point by wearing the same suit for a year  whenever he was reading the news, he can’t have expected to be famous globally for this.

But his statement that he had worn the same Burberry blue suit on screen for twelve months on the Nine Network Today Programme and this had never been noticed by the audience, while what his female colleagues wore was endlessly commented upon, seems to have struck a real nerve.

The story went viral and the now famous ‘sexism suit’ ended up on eBay being auctioned for charity and raising ten thousand Australian dollars for the White Ribbon campaign to end violence against women.  The whole story was a cue for lots of talk about TV sexism and women being judged more than men for what they wear etc..

Soon after this, scientists managed to land a space probe on a comet for the first time ever – a historic achievement by the Rosetta Project of the European Space Agency.

Rosetta Project Scientist, Matt Taylor, went on TV worldwide to talk about this triumph.  Unfortunately he was wearing a casual  short sleeved shirt and not just any casual short sleeved shirt.  It was a large shirt with naked women as part of the large pattern.  Cue outraged protests on Twitter and condemnation all round for his bad taste and poor judgement.

Poor Matt was forced to appear at a subsequent press conference without his soon entitled ‘sexist shirt’. He is clearly not a suit man, but he did make an effort to avoid patterns this time.  He wore a plain dark hoodie.  And, flanked by colleagues, before saying anything else about the truly historic Rosetta Space Project, he had to say how really sorry he was about his shirt.

So what can we learn from these two very different TV clothes stories?

Well the point about appearing on TV as a newsreader, or as a spokesperson for your organisation, is that what you wear should not be more dominant or prominent  than  what you say.  People should remember what you say not what you wear.

So the Australian newsreader was absolutely right to wear an unremarkable suit and the space scientist was wrong to wear a shirt that  distracted viewers from  what he was saying.  Whether he should really have been condemned so much, or just been laughed at a as a (very clever) sartorial idiot, who just doesn’t think much about what he wears, is another issue. I mean it’s probably his best shirt and he thought he was dressing up and looking smart even though he was a bit busy with historic space stuff.  However  -didn’t he have PR people who could have pointed out that the shirt was wrong for TV interviews?

And yes ladies this issue about wearing things that don’t dominate your interview, or even insert themselves at all into the viewers brain, applies to women as well.  In fact the same rules apply to women and men on TV whether as newsreaders or interviewees i.e.  Don’t let your clothes dominate your image and make  sure you give yourself the best chance of getting the audience to listen to you.

The point is that whether you are a newsreader or a spokesperson for your organisation, you want people to remember what you are saying.  And lots of things e.g. your clothes, hairstyle,  jewellery, can get in the way and distract the audience’ s attention.  So whether you are male or female, you need to take a cool hard look at what you are wearing and whether it will be too fussy for TV.

I do think women newsreaders and spokespeople should not wear memorable clothes. They should look smart, stylish and professional – without even a hint of cleavage or fussiness.  Plain and simple suits or smart dresses will make them look professional and authoritative and not like a fashion victim trying too hard to be noticed for clothing, not news content.

It’s probably true that people who comment on Twitter about what female newsreaders are wearing really do need to get out more, but it is also true that some female newsreaders do wear clothes or jewellery which the audience has to spend time processing before concentrating on what they are saying. There are cultural expectations of more variety in clothing for women than men and Karl Stefanovic has very neatly illustrated this.  However there is a balance between looking professional and smart and looking like a bimbo out on the town.

As a media trainer  I always advise spokespeople that you don’t want the audience to remember what you wear. This is important because,  if they do remember your clothes, they were not listening to you.  They were thinking about your terrible tie, shirt, blouse, brooch, big necklace, distracting neckline, unusual collar or cuffs, and not about what you are saying.  What you want them to remember is what you say and that you look professional and credible saying it.  When you get it right, all the audience remembers is that you looked smart and professional  – and that’s it.  So – very useful and revealing stuff from both Karl and Matt.  I wonder if that shirt will be sold for charity – not.