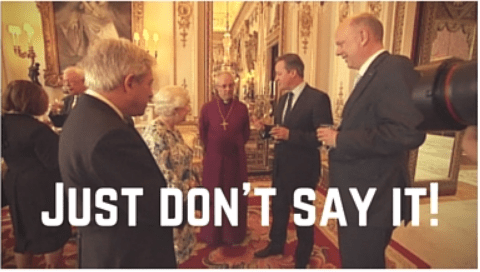 Always beware and be aware of the microphone and camera. It’s advice we always give in our media training sessions.  Whether you’re in a radio or TV studio, or near a camera filming at an event,  you never know who’s listening or who will get to hear you if you’re recorded.  And nowadays this applies not just to TV and video cameras but, as we are all broadcasters now via the internet, to anyone recording with a smartphone or tablet.

One of my favourite early YouTube posts was headlined ‘Chelsea Clinton Explains Why She Doesn’t Give Media Interviews’.  All recorded on an iPad as she spoke to some students at an American university and then posted online. Ironic or what?

The perils of cameras, not just iPads, listening in to public figures are clearly illustrated by the current world wide broadcasting of the unguarded and undiplomatic comments by both the UK Prime Minister and Her Majesty the Queen while the Queen’s own cameraman was recording them for broadcast.

And it’s not just cameras that can be a threat to a smooth and diplomatic image.  Prime Minister Cameron was also caught out last year when rehearsing a speech in Leeds while wearing a live microphone but not on camera. He was heard joking that Yorkshire people “hate each other”.  The PM said: “We just thought people in Yorkshire hated everyone else, we didn’t realise they hated each other so much.” Later, Mr Cameron told the BBC’s Test Match Special it was “a total joke”.

Which is also what President Reagan said when he did what became an infamous sound test before one of his weekly presidential radio talks in 1984.   Asked to say something for voice level, Mr Reagan solemnly intoned: ‘My fellow Americans, I am pleased to tell you that I have signed legislation to outlaw Russia for ever.  We begin bombing in five minutes.’  This was not broadcast live, but it was picked up by radio technicians on tape machines running in studios around the country as they prepared to take a feed of the talk and it was then reported in the media.

At that time the Russians were not amused, protested a lot  and put some of their troops on alert.  Today the Chinese are pretending the whole thing just didn’t happen.  Although there have been a few briefings on the lines of ‘Does Britain still think it’s got an empire? etc., they are blocking reports of the Queen’s remarks about their officials being ‘very rude’ at the time of the visit to Britain last October of President Xi Jinping.

The Nigerians and Afghans are not being so kind to Mr Cameron and his remarks about them being the two most corrupt countries in the world – just before they attended his anti-corruption summit.  Honestly if you put this stuff into a political novel, people would say it was just too over the top embarrassing to ever happen!

Other examples of unintentionally broadcast blunders include Prime Ministers Gordon Brown and John Major.  During the 2010 general election campaign  Labour Prime Minister Brown was caught out by when he got back to his car and still wearing a live microphone, he called Rochdale Labour supporter Mrs Gillian Duffy ‘that bigoted woman’ because she had talked about immigration being a problem.  He was much criticised and he had to apologise in person.

Conservative PM John Major was famously caught out in 1993 when, having finished a TV interview with ITN, he spoke frankly about his opponents within his own party as ‘bastards’ that he would like to ‘crucify’. This was not recorded on camera but was caught on microphones that were still sending sound via a feed to TV newsrooms. They of course all dutifully reported the remarks and a ‘huge row’ followed.

There is real value in never being too frank when cameras are nearby.  It’s not that everything is a conspiracy. Microphones can be left on unintentionally and they can catch you out as well as prime ministers.

If you think you are the exception and you’ll never be caught out by reality TV or a fly on the wall documentary, you’re wrong.  As one veteran producer told me many years ago : ”Documentary makers rely on the fact that after twenty minutes everyone forgets the cameras are there.”

Your critics may not be as (relatively) kind as the Chinese are being to the Queen.  Like businessman Gerald Ratner who famously ruined his own high street jewellery business by telling a business conference that his products were ‘total crap’ and of less value than Marks and Spencer prawn sandwiches, you may live to really regret saying what you really think.

The best advice to avoid embarrassment and unnecessary reputational damage is: if you don’t want something broadcast: Be aware. Just don’t say it.

The 7 steps to Look Even More Professional Online