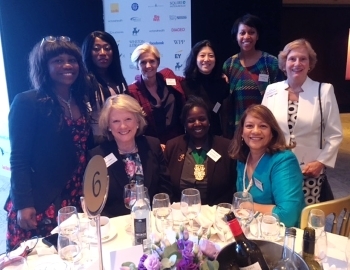 The 2017 Women of the Year Lunch & Awards took place at the InterContinental London Park Lane on Monday 16 October and was hosted by Women of the Year President, Sandy Toksvig. More than 400 women attended and many of these outstanding women, were honoured with Women of the Year Awards which paid tribute to their courage, resilience, resourcefulness and selfless actions, both in the UK and abroad.

Sandi Toksvig, said: “For over 60 years, Women of the Year has proudly recognised and celebrated the achievements of some of the world’s most incredible and bravest women. These women range from the super famous to unsung heroines who are the backbones of charities, emergency and medical services, industries and indeed every profession possible. The remarkable women who make up the attendees and winners at this year’s Lunch are being recognised for their work making the world a better place.”

TV News London’s Managing Director, Roz Morris, who is on the Nominating Committee of Women of the Year Lunch, and has previously led PR campaigns for the Lunch, is pictured above front row left with guests at her table.

Dany Cotton said: “Well, what a fabulous group of women in front of me. What an amazing, amazing lunch. I’m so very honoured to be given this award, and thank you so much to Women of the Year for honouring me in this way. This really, really isn’t about me, this is about the men and the women of the London Fire Brigade. This is about the most fabulous team that I have the most pride to lead. Every day I look at myself and I am just so lucky to be the commissioner of the London Fire Brigade.

And whilst this year has been a really tough year, it’s not a year you’d pick to start your new job. Things kept happening, and then some more things happened, and you start thinking to yourself, ‘when will it ever be normal’, and I think now is normal. This is the future we have but the men and women of our emergency services are absolutely fabulous. We go running into situations that other people would run away from.

One of the things I have launched today is a new campaign called Firefighting Sexism, and it’s a simple campaign, it’s just about challenging people to stop using the word firemen. I’ve been so inspired to be here and I feel so very honoured to be here.”

The Barclays Women of the Year Award was presented to,  ACC Debbie Ford, Assistant Chief Constable Greater Manchester Police, PC Lauren Moore, Naomi Davis, Consultant Royal Manchester Children’s Hospital, Cath Daley, Vicky Wijeratne, Laura Prescott, Lea Vaughan and Shoba Manesh on behalf of the Manchester Emergency and Medical Services. When the bomb exploded in the Manchester Arena at the Ariana Grande concert, the women of the Emergency and Medical Services immediately galvanised into action. Everybody, from ordinary citizens to members of the emergency services and health care professionals behaved in ways that were way beyond the call of duty and the award recognises their extraordinary achievements been chosen by their own organisations to accept the award on behalf of each and every woman.The world-renowned volunteer search and rescue group, The White Helmets won the GoodHousekeeping Women of the Year International Award, recognised for their unrelenting determination to helping those injured in wars and conflict situations. These heroic women, who are trained in medical care as well as search and rescue work and have so far helped more than ninety thousands of survivors of the Syrian Civil War.

The award was collected on behalf of the White Helmets by Anna Nolan, Director of The Syria Campaign.

She said: “The White Helmets have asked me on their behalf to thank Women of the Year for this honour, and they’ve also asked me to share their motto with you all today. It’s taken from the Quran, and it says, ‘To save one life is to save all of humanity’. The White Helmets have saved more than 97,000 lives around the world. These brave women remind us that we’re all part of something greater. And even in the darkest of wars, love will always win.”

Abir Moussa (pictured left) started volunteering with The White Helmets after she witnessed her husband bleed to death following an injury caused by a reported Syrian government air strike. After attending a couple of first aid courses Abir began to join her male colleagues on rescue missions in search for survivors and providing medical aid to the injured.

Alex Eades was named as ITV Lorraine Inspirational Woman of the Year Award winner. Alex, 57, was acknowledged for her fundraising work following the death of 19-year-old daughter Charlotte in 2016. Charlotte was diagnosed with glioblastoma, a rare form of brain cancer in 2015 and documented her journey on YouTube until she lost her battle. Despite her tragic loss, Alex has raised enough money to fund research into this type of cancer for three years. Alex continues to fight in Charlotte’s name, and to help others affected by the disease. The award was presented by Christine Lampard.  ITV Lorraine viewers voted for their Inspirational Woman of the Year by a telephone vote.

Alex Eades said: “This is for my daughter Charlotte, she fought a long and hard battle and the last six weeks of her life took everything from her. She was paralysed, she lost the ability to walk and to talk. She finally gave in to her tumour on 5th February, she was told she was going to die that night and a subsequent three more times and she went on until 24th February. She was my best friend, this is for her.”

“This year’s ceremony recognised and celebrated the bravery of women from our emergency, medical and rescue services both in the UK and internationally in what has been a challenging year. The stories of their heroism are endless.  As I step down and look back on my four years as Chair of Women of the Year, I am very proud that we have continued to shine a light on extraordinary and amazing women and this year is no exception.”

Sponsored by Barclays, Prudential, Good Housekeeping and ITV’s Lorraine, the Women of the Year Lunch, is in its 62ndyear.   Every woman who is invited to the event has achieved something extraordinary in whatever walk of life she comes from. The lunch is an opportunity to recognise and celebrate their bravery, determination, compassion and success.

To find out more about Women of The Year visit http://www.womenoftheyear.co.uk/