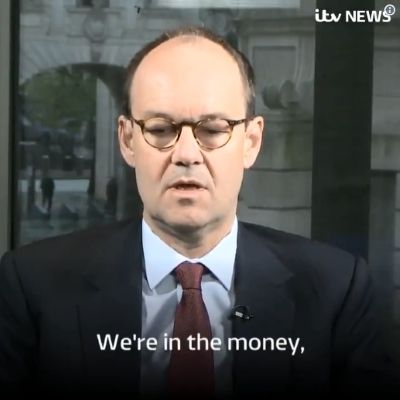 You’re never too big to be reminded of the basics. That must be the conclusion of astonished TV news viewers when they saw the boss of Sainsburys Mike Coupe happily singing ‘ We’re in the money. The sky is sunny, let’s lend it, spend it, send it rolling along,” while waiting to be interviewed about the proposed merger of Sainsburys and Asda.

No matter how many TV interviews you’ve done – no matter how you’re a top boss and becoming even topper as the intended head of the proposed largest supermarket business in the UK – our media training advice is always the same. Don’t say or do anything in a TV studio that you don’t want to be broadcast.  It really is Media Training 101.

News reporters were pinching themselves that they were so lucky. Not only did a mega boss look a bit silly by singing a song  – but – unquestionably a big Freudian slip- up – the words were just so deliciously appropriate for one of the biggest UK business stories ever.

From Mr Coupe’s point of view it was bad enough to be seen to be singing anything at all. But to pick that particular song – it’s from the musical 42nd Street – just clinched his fate. There was no way the news bulletins were not going to pick up on what he called ‘an unguarded moment’ during a twelve billion pound deal. Later he even solemnly apologised in case he had given offence.

“This was an unguarded moment trying to compose myself before a TV interview,” he said. “It was an unfortunate choice of song, from the musical 42nd Street which I saw last year and I apologise if I have offended anyone.”

But this apology rather misses the point.  What his ‘unguarded moment’ did was to make him look a bit stupid and possibly also greedy and generally to undermine and trivialise discussion of a very serious day for Sainsburys and Asda and their more than 330,000 employees.

It broke the spell of authority which TV interviews are supposed to provide, despite the fact that shareholders will be happy that shares have shot up.

And of course this little TV moment will never really go away. Interviewers will even now be preparing to ask Mr Coupe a few months from now:  ‘So are you still in the money Mr Coupe? Are things still sunny? Was this merger really such a good idea?’ etc. etc.. I bet he can’t wait!

Fake It Till You Make It

How to succeed at TV interviews