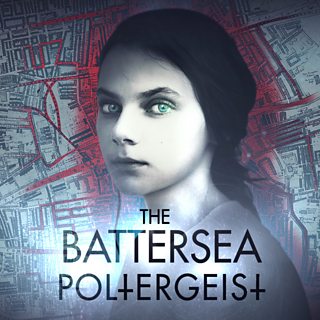 What do you think about poltergeists?  Are you a sceptic or a believer or a don’t know?

You can hear my views in the BBC Sounds podcast series The Battersea Poltergeist with Dafne Keen and Toby Jones.

It’s a drama documentary series investigating the Battersea Poltergeist, which was a series of strange events in a house in Battersea, South London in the 1950’s.  The family and other witnesses heard knocking on the walls, saw objects moving across the rooms and levitation by teenager Shirley Hitchings who was dubbed by some newspapers at the time as ‘vivacious’ and having ‘a ghostly boyfriend’.

Presenter Danny Robins has done excellent work in pulling together the first radio interview with Shirley, the girl at the centre of the  Battersea Poltergeist story. She’s now a woman in her eighties and her memories of that time are crystal clear. He has also found the long lost papers of the paranormal investigator Harold Chibbett, who helped the family at the time.

I’m interviewed in Episode 3 speaking about my experience reporting for BBC radio on the Enfield Poltergeist in the 1970’s.  I did a report for BBC Radio 4 World This Weekend including the first broadcast recordings of  poltergeist activity – loud knocking on the walls of the house.

Why did I go there? Because it was a very slow news day and I was threatened all day with the words- if nothing else turns up you’ll have to go and report on this ghost story on the front page of the Daily Mirror. Nothing else came up.

I didn’t know what to expect and I didn’t really expect something to happen  while I was there. Ghost stories are notorious for the ghost not turning up when reporters are around.

I definitely wasn’t expecting to hear a lot of knocking on the walls as though something or someone was trying to get in.

I was so intrigued, I then spent several months making a BBC radio documentary interviewing the family and many eye witnesses to the knocking, objects and furniture moving, and Janet’s levitation, as well as recording the strange deep voices which appeared to come from Janet and Margaret the two girls involved in the strange happenings that came to be known as The Enfield Poltergeist.

In my long career as a journalist and broadcaster, this was the weirdest, strangest, story I’ve ever had to report on. It was extremely unsettling. I don’t know how or why these strange events occurred at Enfield.

Listening to the podcast about the Battersea Poltergeist there are many similarities between the two cases, as there have been in recorded poltergeist cases over many centuries.

Whatever your views on poltergeists, this new series certainly give us all a lot to think about.

Listen to The Battersea Poltergeist on BBC Sounds

Roz’s documentary on the Enfield Poltergeist in the BBC Archive