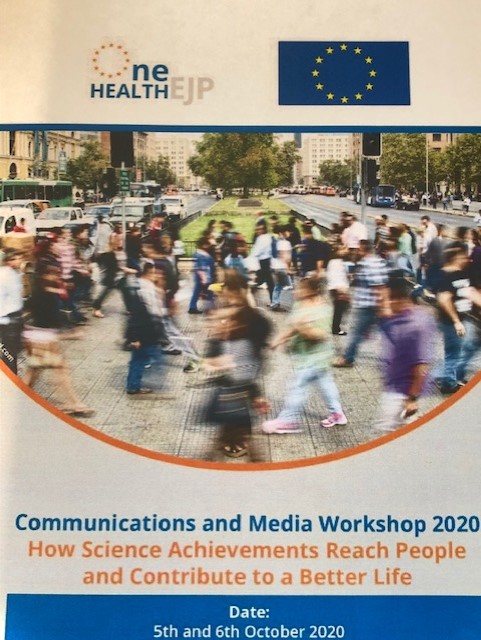 The Covid-19 pandemic means there has never been a time when so many scientists are giving media interviews – yet too many scientists fail to understand how the media works and there is still a culture clash between scientists and journalists. Meanwhile there is a small but increasingly vocal anti-science movement across the world with demonstrations in many major cities against vaccinations and Covid-19 restrictions.

That was the context given by Roz Morris, Managing Director of TV News London, in her talk and workshop for the EU’s One Health EJP conference on  Communications and Media.  The conference, which was originally planned to be held in Sofia, Bulgaria, was hosted online by the Bulgarian Food Safety Agency and the University of Surrey on 5 and 6 October.

One Health EJP (European Joint Project) is an EU initiative set up in 2018 with 37 partners including food, veterinary and medical laboratories, institutes across Europe, and the Med-Vet-Net association, working to create joint expertise on human health, animal health and the environment. Its work is even more relevant now that Covid-19 has jumped from animals to humans and is challenging Governments and scientists across Europe.

Roz told the selected audience of more than 50 early career scientific researchers that they should recognise the importance of media coverage for their research, both in terms of gaining positive publicity for scientific ideas and for gaining  future funding. This means building in media friendly descriptions and explanations of their work right from the start of their research projects, and being able to decode jargon so that scientific concepts can be clearly explained and understood by the public.

She explained the differences between the scientific and media approaches to providing information to the public and provided expert advice on how scientists should plan their approach to media interviews.

Two researchers, Tanveer Munir, veterinary doctor and PhD student from the Ecole Superieur du Bois in Nantes, and Laura Gonzalez Villeta, Veterinary  Medicine and Science PhD student at the University of  Surrey, were interviewed by Roz about their research work.

Tanvir spoke about his research into the anti-bacterial advantages of using wood surfaces instead of plastic in hospitals.  Laura talked about her research into devising a mathematical model to predict how salmonella outbreaks are affected by climate change and rising temperatures.

“We were extremely impressed by the professional quality of the public media training provided by Roz Morris at TV News London.” says Dr Piyali Basu “Roz delivered a highly engaging virtual session called “Researchers and the Public Media” at the One Health EJP Communication and Media workshop.

“The content of the session was  very well planned, and delivered to our scientific audience of over 50 scientific researchers worldwide. The session provided them with an insight into the skills required to communicate scientific research confidently with the media and with maximum impact, and the session even included mock TV interviews with some of our delegates which was very popular.

“We would recommend Roz Morris highly and will certainly be using her services again for similar events in the future.”

The One Health EJP is a landmark EU partnership between 37 partners, including acclaimed food, veterinary and medical laboratories, and institutes across Europe and the Med-Vet-Net association. Full details can be found on the One Health EJP website.

Behind the Business of Global News

Ebonyonline.net features Twinkle for the Camera