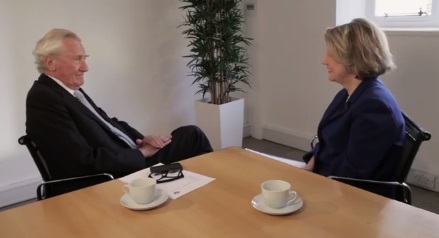 Roz Morris, Managing Director of TV News London, is a Liveryman of the Marketors, the City of  London livery company for senior marketing professionals, and she interviewed Lord Heseltine about his lifetime in marketing for the Marketors’ website

“At 82, and Chairman of Haymarket Media Group, which he founded in the 1970’s, Lord Heseltine is as sharp and incisive as ever” she says. “He is very clear that social media is a key marketing tool but it must be combined with talented and creative people who are allowed to take responsibility in new ways.”

In his interview with Roz, Lord Heseltine says: “The whole industry which I’ve spent my life in is changing at a very bewildering speed.  First of all the recession has had a dramatic effect on the industry but secondly the shift from print to the web is unstoppable.  Now you can take a pessimistic view about that, I don’t.  I take a very optimistic view. The opportunities are today bigger than they have ever been and it falls to any company to see these opportunities and go at them fight for them and hopefully win a proportion of them. That requires an obsession with the quality of the product and then a very determined attempt to put forward the best case for selling it that you can. It’s more demanding, faster moving, but the markets are much bigger today.”

Asked whether he thinks people in marketing actually need different skills from when he started in the 60s or is it really the same skills in a different context, Lord Heseltine replies:

“I think it’s the same skills but adjusted to the markets of today. People say to me about politics what’s new? I say there’s nothing new just read Shakespeare. He explained the political challenges that are today as real as they were when he did it and the same is true of all these skills like salesmanship and marketing. You know you either have the capacity to put forward your case which you believe in or you don’t and that was true with much less sophisticated circumstances. The need for it, the urgency for it, may be bigger but the skills underlying peoples capability are unchanged. “

Michael Heseltine was Deputy Prime Minister under John Major from 1995 to 1997 and a Conservative MP for 35 years from 1966 to 2001.  He was a Cabinet Minister in various departments between 1979 and 1986 and between 1990 and 1997.  He is founder and Chairman of the Haymarket Group, one of the largest privately owned media companies in the UK.  He was appointed by the Coalition Government to support negotiations for Local Growth Deals with Local Enterprise Partnerships. He is also chair of the Independent Advisory Panel for the Regional Growth Fund providing advice to Ministers on the quality of bids.

In October 2012 he published No Stone Unturned in Pursuit of Growth, an independent review into how the public and private sectors in the UK work together to create wealth. Further to this publication he was invited by the Prime Minister to head up a project in Birmingham to pilot his proposals.  He has written books on Europe and his political autobiography, Life in the Jungle and has begun writing a book on urban regeneration, Building Blocks.  Lord Heseltine is an enthusiastic gardener and has created an arboretum for over 3000 different trees and shrubs.

Watch the interview: A Lifetime in Marketing – Lord Heseltine Talks to the Marketors