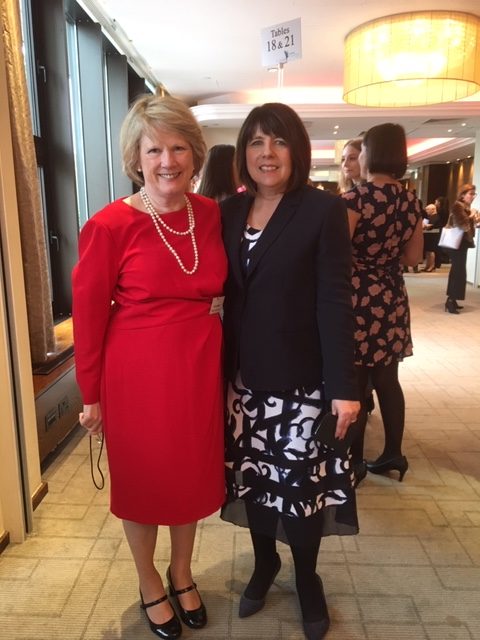 TV News London’s Managing Director Roz Morris attended the 2018 Women of the Year Lunch Awards.  Roz, pictured here with Catherine Roe, the Chair of the Lunch, is a member of the Women of the Year Nominating Committee. She has previously been a board member for Women of the Year and has led the PR campaign for previous lunches.

Roz is pictured with the guests on her table at the lunch:

The 2018 Women of the Year Lunch and Awards took place on Monday 15 October 2018 at the InterContinental Hotel, London Park Lane, where more than 400 women were recognised as ‘Women of Achievement’. Six of these outstanding women were honoured with Women of the Year Awards for their selfless dedication to their fields of work.

Women of the Year President, ITV News presenter, Julie Etchingham, welcomed the group of over 400 women, specially selected for their resilience, resourcefulness, and selfless actions. She was assisted by Women of the Year Lunch Chair, Catherine Roe, MD of Elior UK and comedian and actress Jan Ravens who hosted the event.

The awards presented at the lunch covered a wide spectrum of women’s achievements in technology, sports, science and education.

The  Barclays Women of the Year Award was presented to Dr Anne-Marie Imafidon MBE, Co-Founder of Stemettes. Anne-Marie oversees the award-winning social enterprise for 15 to 21-year-old young women, inspiring the next generation of females into Science, Technology, Engineering and Mathematics roles.

In under four years more than 13,000 girls across the UK, Ireland and Europe have attended Stemette experiences. As part of the initiative Anne-Marie has also co-founded Outbox Incubator, which is the world’s first tech incubator for teenage girls. The award was presented by Natalie Dormer.

The Women of the Year Shine a Light Award was awarded to Anne Norona, an NHS Nurse volunteering in Iraq, working to protect and provide for the persecuted Yazidi women. Anne funds her trips to Iraq through the Botox injections she performs as a nurse. Through her fundraising, Anne has recently opened the first antenatal clinic in northern Iraq, since Isis struck the area four years ago as well as a child-friendly space to support the Isis survivors. Her award was presented by Kate Adie.

Author and campaigner, Carmel McConnell MBE won the Women of the Year Campaigner Award Sponsored by Eli Lilly and Company, recognised for her unrelenting determination to provide free and healthy breakfasts to schools in disadvantaged areas across the country and in Scotland. These are schools with over 35% free school meals, where large numbers of pupils arrive too hungry to learn.

Carmel’s lobbying led to the National School Breakfast Programme, which will reach 1,775 new schools, and 150,000 hungry schoolchildren after launching in March this year, in partnership with Family Action. The two charities are working together to deliver the Department for Education’s new programme. The award was presented by Fearne Cotton.

Jennifer is a serving soldier with the Royal Engineers and is currently on a two-year secondment from her military duties to allow her to work as Menna’s sighted guide. In addition to being a world-renowned skier, Jennifer has sailed competitively, completed a tour of Afghanistan and won several medals competing for her country.

With five percent vision, Menna longed to become a gold-winning Olympian athlete at a young age, and quickly realised her ambition before the age of 21 at the PyeongChang 2018 Winter Olympics. Menna’s trophy case now holds two silver and one bronze medal from the same Winter Paralympics, plus a host of other awards from the World Cup and the World Championships.

Menna was born with congenital retinal folds. She has no vision in her left eye and limited sight in her right. Their awards were presented by Dame Katherine Grainger DBE and Baroness Tanni Grey-Thompson DBE

Andrea Smith was named as ITV Lorraine Inspirational Woman of the Year Award winner. Andrea was honoured for her work in setting up a football academy and youth club in September 2017 called the ASD Academy. The Academy is specifically set up for children who are on the autistic spectrum and teaches children with autism how to play football with the aim to get as many as possible to move into the standard teams. The award was presented by Lorraine Kelly.

Julie Etchingham, President of Women of the Year, said: “For over 60 years, Women of the Year has proudly recognised and celebrated the achievements of some of the world’s most incredible and bravest women.”

“Every one of the winners this year are making a mark on history through standing up for persecuted women, breaking the mould set for working women and selflessly dedicating their time make the world better. It is a truly remarkable event and I’m grateful to be a part of it.”

Sponsored by Barclays, Lilly, and ITV’s Lorraine, the event, which is in its 64th year was held at the Intercontinental Hotel in London’s Park Lane. Every woman who is invited to the event has achieved something extraordinary in whatever walk of life she comes from. The lunch is an opportunity to recognise and celebrate their bravery, determination, compassion and success.

ITV Lorraine viewers voted for their Inspirational Woman of the Year by a telephone vote promoted by Lorraine’s show which runs every weekday morning after the ITV Breakfast show Good Morning Britain.

BBC has The Last Word on Guy Playfair